Let us kickstart this year with a post from a guest writer, Ms. Roobini. She brings to you a less heard of recipe in Chennai, but that which is very famous in Tirunelveli – Simili.

Simili – don’t muse about the simile/metaphor of English classes. Simili is a dish made of ragi, peanut and jaggery; and for those who don’t know Tamil, urundai = laddu = ball-like. I am eager to share with you all, this recipe that I learnt from my grandmother. 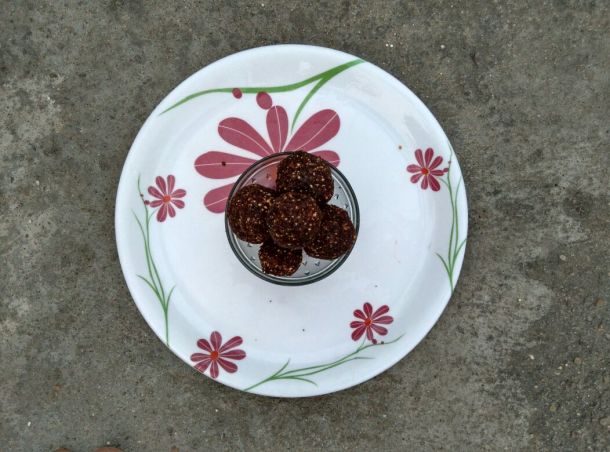 This dish is a low-cost, healthy snack that is rich in iron(ragi, jaggery), calcium(ragi) and protein(peanuts) and is suitable for all age groups. Some also add roasted sesame seeds to the mix, which further enriches the dish with iron-protein and makes it tastier.

The author, Ms Roobini has completed her under-graduation in Clinical Nutrition and Dietetics. She is currently pursuing her Masters in Dietetics and Food Service Management. Watching various cookery programmes and trying her hand at new dishes is her hobby.

Kosambari is a cucumber-carrot-moong dhal salad that is popular in South India, especially in Karnataka. It is an integral part of wedding menus and is also offered as ‘Prasadham’ or Holy food in some temples. It is known by the same name in Telugu and as Kosumalli in Tamil. The salad does not involve cooking but demands prepreparation ahead of time. The moong dhal (greengram dhal) used is not cooked but soaked in water for atleast a couple of hours to soften it. So prior planning is important for the success of the final dish. Glance through the directions to prepare Kosambari and give it a try.

Do not mix or add salt until service time. Do these just before serving to prevent the salad from becoming runny.

Kosambari uses a beautiful interplay of colours, textures and flavours to produce a tasty salad. It is a healthy dish that not only offers micronutrients but also contributes protein from the dhal. It can be served as a snack or as a side dish to any of the three courses of South Indian meal. Though the recipe here uses a cucumber-carrot-dhal combo, pairing the dhal either with only cucumber or only carrot or only shredded cabbage are other possibilities. Unripe mango gratings (with the skin) can also complement this salad. But an ultimate way to take this salad to the next level is to add mango ginger (a rhizome that looks like ginger but tastes like unripe mango) gratings to it. It bursts with flavour in the mouth and enhances the taste. So, quick! Make this salad a part of your routine menu.

Links to Other Salads:

Sprouts are often glorified as ‘live foods’ and rightly so, because they are seeds germinating into baby plants. Sprouting impacts the nutritional quality of the seed tremendously and transforms it into a super food. The soaking step, kick starts the metabolic activity of the seed and brings about many advantageous changes. On sprouting,

Those who have attempted sprouting would understand that these changes are so much in return for the little effort we throw in! Moong or green gram is the most commonly sprouted pulse, as is ragi among cereals. Let’s get acquainted with the process of sprouting and making moong sprouts sundal (Mulaikattiya Pachai Payaru Sundal in Tamil).

This is not much of a work at all – it is easy and fun too. So next time, don’t hunt for sprouts in supermarkets. Just DIY. 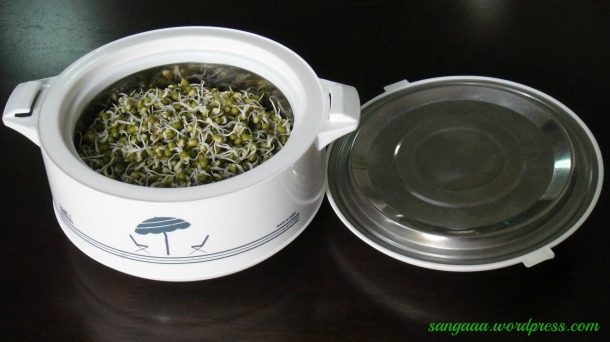 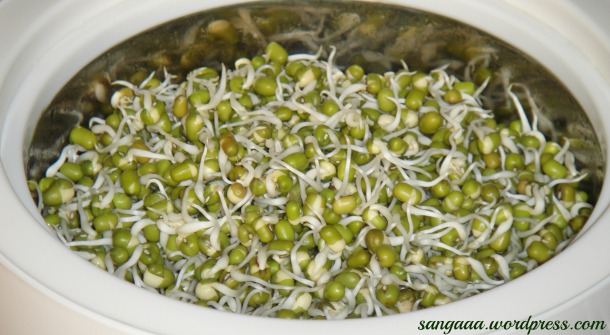 Other Simple Ways to Use Moong Sprouts:

I usually use half of the soaked moong to make normal sundal (which requires pressure cooking for 1 whistle and immediately releasing the pressure, before proceeding to the other steps) and leave the rest to sprout, to use another day. That takes care of snacks for 2 days – smart planning, eh?

Few things that comfort us when we stay abroad are friends, secure job and good food. Speaking about food, experimenting with new foods may be exciting only when it is occasional. But, if situations impose it on us on a daily basis, it becomes a frustrating issue. Availability of our local foods in a foreign land may give us a tremendous sense of relief. Strangely enough, foods of an alien country which bear streaks of similarity to our native food also bring us so much happiness. Perhaps, the thought that they eat like us, makes us feel that those people are not so different from us. It, in a way, helps to reduce the gap between us. Falafel or Chickpea patty is one such Middle Eastern food that is so much like our South Indian Masal Vadai.

The clear cut instructions and video tutorial at videojug.com inspired me to try my hand at making falafels. I tried following the recipe to the T. I strayed away from the original, in adding finely chopped onions to the mix and flattening the patty mix instead of rounding them as spheres. The result, as you see below, was very good.

The fact that it does not require water during grinding makes it safe play. As you all know, this is where many go wrong while preparing masal vadai – add more water to the batter and subsequently face problems while shaping the vadai; more water in the batter also absorbs more oil during deep frying. The all purpose flour acts as a binding agent and makes it easier to mould the falafel into shape and keep it intact.

If you are intent upon pointing some setbacks of falafel in comparison with masal vadai, then you could state: the longer soaking time required for chickpeas than the Bengalgram dhal; the longer list of ingredients for falafel; the baking salt in it amounting to more sodium.

But on the whole, it is a tasty snack and would remain healthy, if portion control is taken care of – restrict to 2. In the Middle East, falafel is either served with tahini sauce or in Mushakel.  Mushakel is a sandwich made by stuffing falafels in pita along with salad, pickled vegetables and tahini sauce.

It is now your turn to try this Middle Eastern Dish.